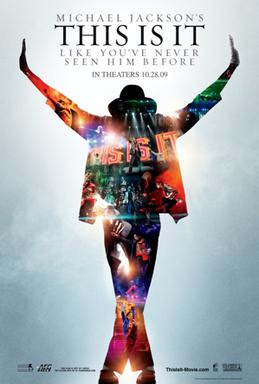 【Yahoo Movie】A rare glimpse into the final days of Michael Jackson, the documentary is compiled from an estimated 80 hours of rehearsal and behind-the-scenes footage of the legendary entertainer preparing for his 50 sold-out shows at London's O2 Arena that were scheduled to commence in July 2009 before his untimely death in June at age 50. Interviews with collaborators and close friends of the late performer are also featured.


Presented by: The Inner Space at precisely 12:00 AM 6 comments:
Genre(s): celebrity, movies, Music


Presented by: The Inner Space at precisely 12:00 AM 20 comments:
Genre(s): celebrity, Forums, News


【英文維基百科】（含內容簡介 include brief story line）
The story takes place over a period of 12 hours in Washington, D.C., with a focus on Freemasonry.


Robert Langdon is summoned to give a lecture in National Statuary Hall at the United States Capitol, with the invitation apparently from his mentor, a 33rd degree Mason named Peter Solomon, who is the head of the Smithsonian Institution. Solomon has also asked him to bring a small package which he had entrusted with Langdon for safekeeping years earlier.


When Langdon arrives at the Capitol, however, instead of an audience for his lecture, and after receiving a phone call from the person that he thought was from Solomon's office he hears screams coming from the Capitol Rotunda. Running, he finds the severed right hand of Peter Solomon mounted on a stick, directly in the middle of the room.


The hand contains tattoos on each finger, and Langdon recognizes it as the symbolic 'Hand of the Mysteries', which seemingly points straight up to the fresco The Apotheosis of Washington on the inside of the Capitol dome.


Noticing Peter's ring on one of the hand's fingers, Langdon realizes that it is the hand of his kidnapped friend, and from messages already received he knows that the kidnapper wants him to find both the Mason's Pyramid, which Masons believe is hidden somewhere underground in Washington D.C., and the Masons' word which will complete the task that the kidnapper has given himself.


Soon the head of the Capitol police arrives, followed by the head of the CIA's Office of Security, Inoue Sato. As Langdon begins to analyze the tattoos on the hand, he tells Sato that if the fingers of the hand are moved, more tattooing will be found. She opens the fingers, and finds another clue, which eventually they all figure out points them down instead of up.


They journey to a neglected and almost unknown portion of the capitol's sub-basement, and in a small room find Peter Solomon's Masonic Altar which many Masons construct in their home to remind them of the fleeting nature of life. A skull and other symbolistic items adorn the altar, but when a candle is lit the group notices that one wall seems to be moving in the slight breeze.


When what turns out to be a curtain is moved aside, a small pyramid with no capstone is found, with words carved into it, which obviously will take Langdon to the next stop on his search to find the word in time to save his kidnapped friend.


During this period Sato, who had asked the Capitol police to look closely at a security x-ray taken of Langdon's bag when he entered the building, finds out that the x-ray shows that the package Langdon is carrying contains another small pyramid.


She asks Langdon about it, and he, being unaware of what the package he was bringing to Peter Solomon contained, says he doesn't know what she means. She has him restrained, and is prepared to take him and the two pyramids to CIA headquarters for questioning.


At this point Warren Bellamy, the Architect of the Capitol and a Freemason, arrives in the sub-basement room, instantly grasps the situation, and knocks down the police chief and the CIA security chief, frees Langdon, and urges him to follow him back to the upper levels of the Capitol.


The kidnapper turns out to be Mal'akh, a brilliant, tattooed villain whose main motivation is the obtaining of an ancient source of power, and who continues to demand that Langdon unlock the Ancient Mysteries in return for Peter's life.


In a fiery nighttime explosion, Mal'akh also destroys the Smithonsonian-sponsored laboratory of Dr. Katherine Solomon, Peter's younger sister, where she conducted successful experiments in the area of Noetic Science. In addition, the CIA is pursuing Mal'akh in the interests of National Security.


Mal'akh puts Langdon in a tank of breathable oxygenated liquid from where Langdon unlocks the code at the Pyramid's base. Then Mal'akh after learning the answer from Langdon, takes Peter Solomon with him, leaving Langdon - who is seen to die in the tank - and Katherine, who is bound and left to bleed to death.


When the CIA arrives, they release Langdon and Katherine who tell them where Mal'akh is headed. With Langdon's directions they set out to stop Mal'akh.


In the Temple Room of the Scottish Rite's House of the Temple, threatening to release a heavily edited videotape showing government officials performing the Masons' secret rituals, Mal'akh, who turns out to be Zachary Solomon, forces the Word out of his father, Peter, and tattoos it on his head.


Then Zachary Solomon forces Peter to sacrifice him as he believes that it is his great destiny to lead the forces of evil. Peter refuses to do so just as the helicopter in which Director Sato is in smashes the overhead glass panel, many of its pieces striking Zachary just as Langdon rushes in.


Peter Solomon then tells Zachary that the Word he has tattooed on his head is not the word. Zachary Solomon dies and the CIA stop the video from being transmitted to several leading Media Channels.


After Peter regains his composure, he tells Langdon that the word is indeed real, and that he will take him to it. After blindfolding Langdon so he can't see where they are going, likely in an attempt to give him a type of Freemason initiation, they finally arrive at their destination which Sato had arranged to have opened for them. Going through barriers which shut behind them, and then led a few feet within a chamber, Solomon asks Langdon to remove the blindfold and look down.


He does, and as his eyes adjust to the darkness and a flashlight is provided, Langdon sees a deep stairway going well into the darkness below. He is then led to a window, eyes closed, and told that what he will see will transform him. He opens his eyes, sees the Capitol below and away from him, and instantly knows that he is in the room atop the Washington Monument.


Looking at the city from the four windows situated there, Langdon is told that the word does lie beneath hundreds of stairs beneath the massive stone, the pyramid stone atop the Monument, buried in the cornerstone of the building. Langdon realizes that the symbols which pointed there were used to actually spell out the words Laus Deo which translate to "Praise God".


These words, Langdon knows, are imprinted in very tiny letters on the actual and very small aluminum capstone which lies on top of the pyramid above. As they descend the staircase, Solomon tells Langdon that the word underground is a copy of the Bible, but explains that the "secrets hidden in plain sight" in the Bible all point to the belief that man is a part of God, and that out of many minds comes one, an at-one-ment.


That this word, this hidden-in-plain-view belief, is contained in all the major books of religion; while the masses look to one set of data in each of the holy books, enlightened men and women can see the encoded-in-plain-sight information in them all.


Presented by: The Inner Space at precisely 12:00 AM 6 comments:
Genre(s): books, celebrity, movies

Presented by: The Inner Space at precisely 12:00 AM 15 comments:
Genre(s): celebrity, memories, Music