Presented by: The Inner Space at precisely 12:35 AM 2 comments:
Genre(s): celebrity, News

The Wit and Wisdom of Winston Churchill

The Wit and Wisdom of Winston Churchill 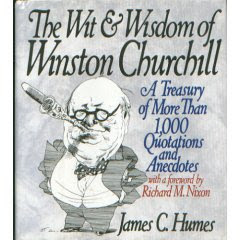 Churchill was at the White House as a guest of President Roosevelt . One morning when he clambered out the bath and was walking past the bedroom door when there was a rat-tat-tat. As he was closest to the door, he automatically opened it. On the other side of the door was Roosevelt in his wheelchair. He was startled to see the prime minister in the nude, but Churchill simply said: "Good Morning, Mr President, do come in. As you can see I have nothing to hide from the United States."

between Clement Attlee and Churchill (這句更底死)

In the gentlemen's room, Churchill walked to the other end when Clement came in.
Clement: "Winston, I know we are political opponents, but we don't have to carry our differences into the gentlemen's lavatory."
Winston: "Clement, the trouble with you Socialists is that whenever you see anything in robust and sturdy condition you want the government to nationalize it."

付註:
出自 The Wit and Wisdom of Winston Churchill: A treasury of more than 1,000 Quotations and Anecdotes by James C. Humes 我還未全讀完巔巔兄blogged 的所有文章﹐如果我是重複了巔兄的﹐那正好應了這一句話: IMITATION is the sincerest flattering, 模仿別人就是最由衷的讚美==>說俗點就是“最由衷的擦鞋", 擦巔兄的鞋。

Presented by: The Inner Space at precisely 9:23 AM 2 comments:
Genre(s): books 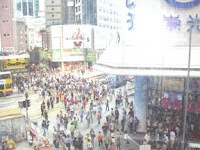 Presented by: The Inner Space at precisely 10:51 AM 4 comments:
Genre(s): No Label

Visit the site or view the promotional video below from YOUTUBE with your kids or if you YOURself still have a young heart.

Related links: The Promotion Video See the same video as above if your youtube doesnt work The site See video of Santa being seen at various spots around the world like Great Wall of China, the Opera House of Sydney Australia, Fuji Yama of Japan etc etc. click at each spot to see separate video History For more than 50 years, NORAD and its predecessor, the Continental Air Defense Command (CONAD) have tracked Santa. The tradition began after a Colorado Springs-based Sears Roebuck & Co. store advertisement for children to call Santa on a special "hotline" included an inadvertently misprinted telephone number. Instead of Santa, the phone number put kids through to the CONAD Commander-in-Chief's operations "hotline." The Director of Operations, Colonel Harry Shoup, received the first "Santa" call on Christmas Eve 1955. Realizing what had happened, Colonel Shoup had his staff check radar data to see if there was any indication of Santa making his way south from the North Pole. Indeed there were signs of Santa and children who called were given an update on Santa's position. Thus, the tradition was born. In 1958, the governments of Canada and the United States created a bi-national air defense command for the North American continent called the North American Air Defense Command, known as NORAD. Canada and the U.S. believed they could better defend North America together as a team instead of separately. NORAD carried out its first Santa tracking in 1958 after inheriting the tradition from CONAD. Since that time, Canadian and American men and women who work at NORAD have responded to phone calls from children personally. Additionally, media from all over the world call NORAD on Christmas Eve for updates on Santa's location. Last year this Website was visited by millions of people who wanted to know Santa's whereabouts. This year, the information is provided in six languages.

Sourced from NORAD.org and Youtube.com

Presented by: The Inner Space at precisely 12:59 AM 2 comments:
Genre(s): books, News, Travel