Presented by: The Inner Space at precisely 12:00 AM 2 comments:
Genre(s): books, celebrity, snakeden


【維基百科】The Day After Tomorrow is a 2004 American science fiction disaster film co-written, directed, and produced by Roland Emmerich. The film depicts fictional catastrophic climatic effects in a series of extreme weather events that usher in global cooling and leads to a new ice age.


【維基百科】A polar vortex (also known as a polar cyclone, polar low, or a circumpolar whirl) is a persistent, large-scale cyclone located near either of a planet's geographical poles. On Earth, the polar vortices are located in the middle and upper troposphere and the stratosphere. They surround the polar highs and lie in the wake of the polar front.

【維基百科】These cold-core low-pressure areas strengthen in the winter and weaken in the summer due to their reliance upon the temperature differential between the equator and the poles. They usually span less than 1,000 kilometers (620 miles) in which the air circulates in a counter-clockwise fashion (in the Northern Hemisphere). As with other cyclones, their rotation is caused by the Coriolis effect.

【維基百科】When the polar cyclone is weak, the general flow pattern across mid-latitudes buckles and significant cold outbreaks occur. Ozone depletion occurs within the polar vortex, particularly over the Southern Hemisphere, and reaches a maximum in the spring.


【維基百科】In a USA Today editorial by Patrick J. Michaels, a Research Professor of Environmental Sciences at the University of Virginia who rejects the scientific evidence for global warming, Michaels called the film "propaganda," noting, "As a scientist, I bristle when lies dressed up as 'science' are used to influence political discourse." In a Space Daily editorial by Joseph Gutheinz, a college instructor and retired NASA Office of Inspector General, Senior Special Agent, Gutheinz called the film "a cheap thrill ride, which many weak-minded people will jump on and stay on for the rest of their lives."

Paleoclimatologist William Hyde of Duke University was asked on Usenet whether he would be seeing the film; he responded that he would not unless someone were to offer him $100. Other readers of the newsgroup took this as a challenge, and (despite Hyde's protests) raised the necessary funds. Hyde's review criticized the film's portrayal of weather phenomena that stopped at national borders, and finished by saying that it was "to climate science as Frankenstein is to heart transplant surgery", as quoted in New Scientist.

However, Stefan Rahmstorf of the Potsdam Institute for Climate Impact Research, expert for thermohaline ocean circulation and its effects on climate, was impressed how the script writer Jeffrey Nachmanoff was well informed about the science and politics of global climate change after the talk with him at the preview of the film in Berlin. He stated: "Clearly this is a disaster movie and not a scientific documentary, the film makers have taken a lot of artistic license.

But the film presents an opportunity to explain that some of the basic background is right: humans are indeed increasingly changing the climate and this is quite a dangerous experiment, including some risk of abrupt and unforeseen changes. After all - our knowledge of the climate system is still rather limited, and we will probably see some surprises as our experiment with the atmosphere unfolds. Luckily it is extremely unlikely that we will see major ocean circulation changes in the next couple of decades (I’d be just as surprised as Jack Hall if they did occur); at least most scientists think this will only become a more serious risk towards the end of the century.

And the consequences would certainly not be as dramatic as the ‘super-storm’ depicted in the movie. Nevertheless, a major change in ocean circulation is a risk with serious and partly unpredictable consequences, which we should avoid. And even without events like ocean circulation changes, climate change is serious enough to demand decisive action. I think it would be a mistake and not do the film justice if scientists simply dismiss it as nonsense.

For what it is, a blockbuster movie that has to earn back 120 M$ production cost, it is probably as good as you can get. For this type of movie for a very broad audience it is actually quite subversive and manages to slip in many thought-provoking things. I'm sure people will not confuse the film with reality, they are not stupid - they will know it is a work of fiction. But I hope that it will stir their interest for the subject, and that they might take more notice when real climate change and climate policy will be discussed in future."

In 2008, Yahoo! Movies listed The Day After Tomorrow as one of Top 10 Scientifically Inaccurate Movies. The film was criticized for depicting several different meteorological phenomena occurring over the course of hours, instead of the possible time frame of several decades or centuries.


Presented by: The Inner Space at precisely 12:00 AM 2 comments:
Genre(s): books, movies, Travel 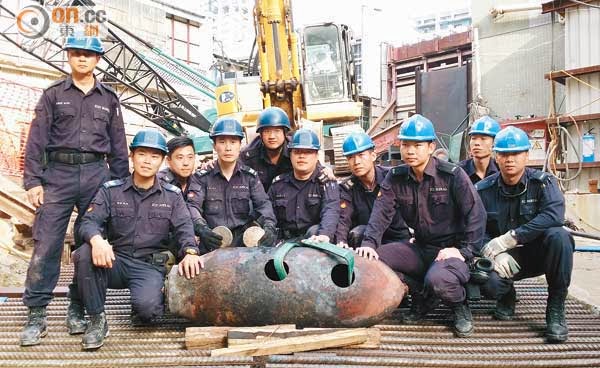 【SCMP】The 2,000-pound second world war bomb that brought chaos to Happy Valley was dropped during a huge one-day pounding of Japanese positions in the city in 1945, US military documents have revealed.

As the hundreds evacuated on Thursday from hotels, offices and flats near the construction site where the bomb was unearthed returned yesterday, amateur military historian Craig Mitchell said it was likely that the ANM66 was one of just 11 bombs of such size and destructive power ever dropped on Hong Kong during the second world war. The raid took place on January 16, 1945.

Police records show that the device was only the second of its kind found in the city since the end of the war.