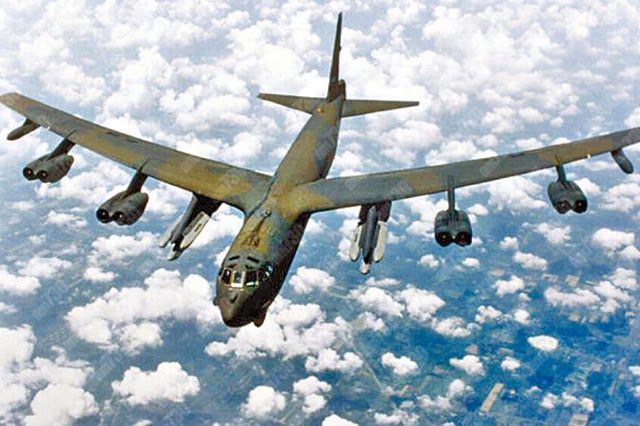 
【維基百科】The Boeing B-52 Stratofortress is a long-range, subsonic, jet-powered strategic bomber. The B-52 was designed and built by Boeing, which has continued to provide support and upgrades. It has been operated by the United States Air Force (USAF) since the 1950s. The bomber is capable of carrying up to 70,000 pounds (32,000 kg) of weapons.

Beginning with the successful contract bid in June 1946, the B-52 design evolved from a straight-wing aircraft powered by six turboprop engines to the final prototype YB-52 with eight turbojet engines and swept wings. The B-52 took its maiden flight in April 1952. Built to carry nuclear weapons for Cold War-era deterrence missions, the B-52 Stratofortress replaced the Convair B-36. A veteran of several wars, the B-52 has dropped only conventional munitions in combat. The B-52's official name Stratofortress is rarely used in informal circumstances, and it has become common to refer to the aircraft as the BUFF (Big Ugly Fat Fucker). 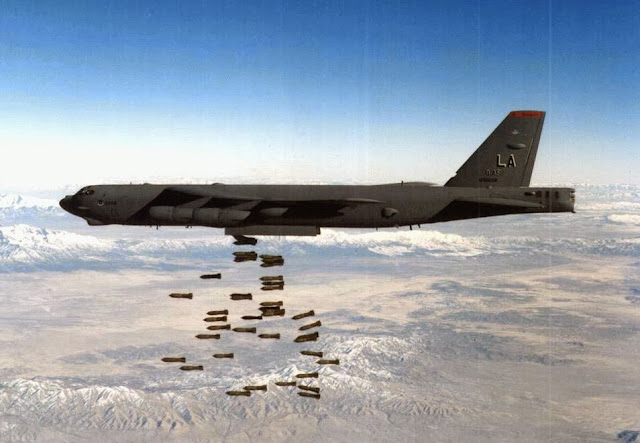 
【維基百科】The B-52 has been in active service with the USAF since 1955. As of 2012, 85 were in active service with nine in reserve. The bombers flew under the Strategic Air Command (SAC) until it was inactivated in 1992 and its aircraft absorbed into the Air Combat Command (ACC); in 2010 all B-52 Stratofortresses were transferred from the ACC to the new Air Force Global Strike Command (AFGSC).

Superior performance at high subsonic speeds and relatively low operating costs have kept the B-52 in service despite the advent of later aircraft, including the canceled Mach 3 B-70 Valkyrie, the variable-geometry B-1 Lancer, and the stealth B-2 Spirit. The B-52 completed fifty years of continuous service with its original operator in 2005; after being upgraded between 2013 and 2015, it is expected to serve into the 2040s. 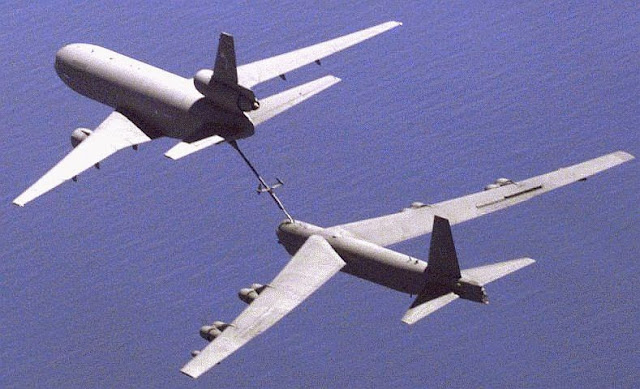 
【維基百科】The B-52 shared many technological similarities with the preceding Boeing B-47 Stratojet strategic bomber. The two aircraft utilized the same basic design, such as swept wings and podded jet engines, and the cabin included the crew ejection systems. On the B-52D, the pilots and electronic countermeasures (EDM) operator ejected upwards, while the lower deck crew ejected downwards; until the B-52G, the gunner had to jettison the tail gun to bail-out.

The ability to carry up to 20 AGM-69 SRAM nuclear missiles was added to G and H models, starting in 1971. To further improve the B-52's offensive ability, air-launched cruise missiles (ALCMs) were fitted.

After testing of both the air force-backed Boeing AGM-86 and the navy-backed General Dynamics AGM-109 Tomahawk, the AGM-86B was selected for operation by the B-52 (and ultimately by the B-1 Lancer). A total of 194 B-52Gs and Hs were modified to carry AGM-86s, carrying 12 missiles on underwing pylons, with 82 B-52Hs further modified to carry another eight missiles on a rotary launcher fitted in the aircraft's bomb-bay.

To conform with SALT II Treaty requirements that cruise missile-capable aircraft be readily identifiable by reconnaissance satellites, the cruise missile armed B-52Gs were modified with a distinctive wing root fairing. As all B-52Hs were assumed modified, no visual modification of these aircraft was required.

In 1990, the stealthy AGM-129 ACM cruise missile entered service; although intended to replace the AGM-86, a high cost and the Cold War's end led to only 450 being produced; unlike the AGM-86, no conventional (non-nuclear) version was built. The B-52 was to have been modified to utilize Northrop Grumman's AGM-137 TSSAM weapon; however, the missile was canceled due to development costs. 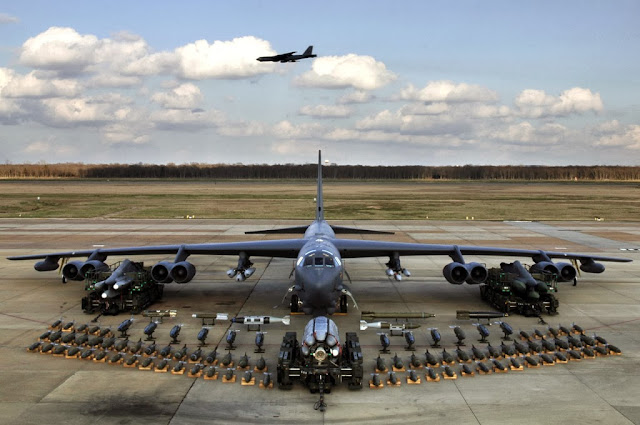 
【維基百科】Those B-52Gs not converted as cruise missile carriers underwent a series of modifications to improve conventional bombing. They were fitted with a new Integrated Conventional Stores Management System (ICSMS) and new underwing pylons that could hold larger bombs or other stores than could the external pylons. Thirty B-52s were further modified to carry up to 12 AGM-84 Harpoon anti-ship missiles each, while 12 B-52Gs were fitted to carry the AGM-142 Have Nap stand-off air-to-ground missile.[97] When the B-52G was retired in 1994, an urgent scheme was launched to restore an interim Harpoon and Have Nap capability, the four aircraft being modified to carry Harpoon and four to carry Have Nap under the Rapid Eight program.

The Conventional Enhancement Modification (CEM) program gave the B-52H a more comprehensive conventional weapons capability, adding the modified underwing weapon pylons used by conventional-armed B-52Gs, Harpoon and Have Nap, and the capability to carry new-generation weapons including the Joint Direct Attack Munition and Wind Corrected Munitions Dispenser guided bombs, the AGM-154 glide bomb and the AGM-158 JASSM missile. The CEM program also introduced new radios, integrated Global Positioning System into the aircraft's navigation system and replaced the under-nose FLIR with a more modern unit. Forty-seven B-52Hs were modified under the CEM program by 1996, with 19 more by the end of 1999. 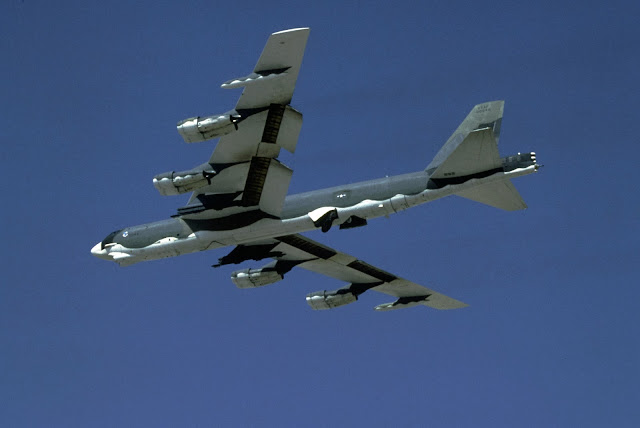 
【維基百科】Starting in 2016, Boeing is to upgrade the internal rotatory launchers to the MIL-STD-1760 interface to enable the internal carriage of smart bombs, which can currently only be carried on the wings.

For a study for the U.S. Air Force in the mid-1970s, Boeing investigated replacing the engines, changing to a new wing, and other improvements to upgrade B-52G/H aircraft as an alternative to the B-1A, then in development. Boeing later suggested re-engining the B-52H fleet with the Rolls-Royce RB211 535E-4.

A Government Accountability Office study concluded that Boeing's estimated savings of US$4.7 billion would not be realized and that it would cost US$1.3 billion over keeping the existing engines; citing significant up-front procurement and re-tooling expenditure, and the RB211's higher maintenance cost. The GAO report was subsequently disputed in a Defense Sciences Board report in 2003; the Air Force was urged to re-engine the aircraft without delay. 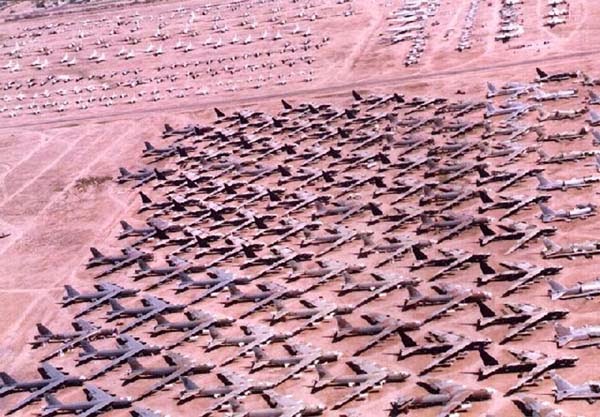 
【維基百科】Further, the DSB report stated the program would have significant savings, reduce greenhouse gas emissions, and increase aircraft range and endurance; in line with the conclusions of a separate Congress-funded study conducted in 2003. The re-engining has not been approved as of 2013. 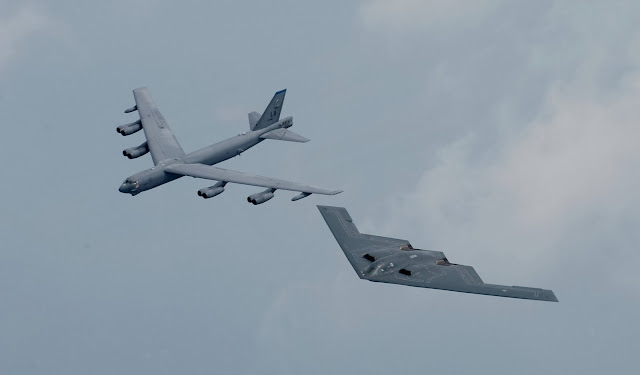 
【維基百科】The B-52H had the same crew and structural changes as the B-52G. The most significant upgrade was the switch to TF33-P-3 turbofan engines which, despite the initial reliability problems (corrected by 1964 under the Hot Fan program), offered considerably better performance and fuel economy than the J57 turbojets.

The ECM and avionics were updated, a new fire control system was fitted, and the rear defensive armament was changed from machine guns to a 20 mm M61 Vulcan cannon (later removed in 1991–94). A provision was made for four GAM-87 Skybolt ballistic missiles. The aircraft's first flight occurred on 10 July 1960, and it entered service on 9 May 1961. This is the only variant still operational. A total of 744 B-52s were built. The last production aircraft, B-52H AF Serial No. 61-0040, left the factory on 26 October 1962. 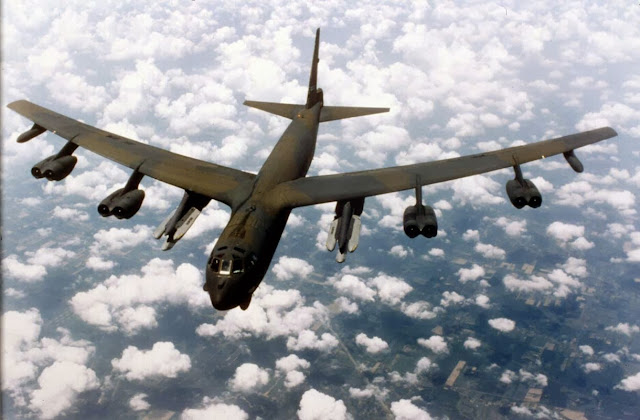 Guns: 1× 20 mm (0.787 in) M61 Vulcan cannon originally mounted in a remote controlled tail turret on the H-model, removed from all current operational aircraft in 1991


The only active operational model of the B-52 is the B-52H. It is currently stationed at two USAF bases, flown by three wings:


Presented by: The Inner Space at precisely 12:00 AM
Genre(s): books, history, snakeden